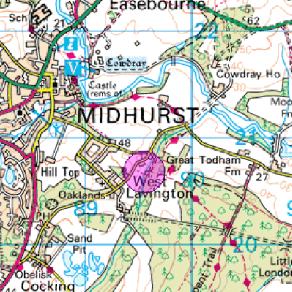 The Costers Brook is a delightful tributary of the Western Rother, rising from the natural Chalk springs of the South Downs and flowing down towards the town of Midhurst in West Sussex. The Western Rother is failing the European Union (EU) Water Framework Directive (WFD) targets for fish. This is due to a number of issues, including in-channel obstructions, water quality problems and geomorphological limitations. The Costers Brook provides excellent quality habitat for range of fish species, including sea trout, brown trout, eels, river lamprey and other coarse fish species, however, access is limited by two structures located within a couple of kilometres of the confluence of the Brook with the Rother. These obstructions comprise a weir at a mill (now a domestic dwelling) and less than one kilometre upstream of this is a culverted farm bridge. The project proposal was to significantly improve passage for sea trout, brown trout, eel and other coarse fish species over these two structures, opening up several kilometres of watercourse.

In particular, the stretch of Costers Brook improved is recognised by the local Environment Agency as being critical as the upper part of the brook has concreted gravels due to the natural chemical makeup of the stream, and the lower sections are drowned in sand (another problem facing the Brook), therefore the middle reach that this project addresses provides the best spawning habitat opportunity for the Brook as a whole. The initial overall project plan was to facilitate fish easement at the mill weir by devising a suitable means of improving fish passage (either through a unique design or by installing a section of pre-formed fish pass) and to replace/modify the multi-culverted farm bridge with a clear span bridge or to undertake river modification works to ease fish migration through the culvert pipes.