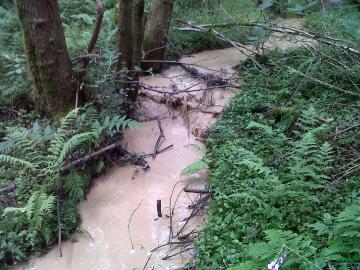 Pollution means that there is too much of a material (a pollutant) in the water that is harmful to aquatic plants or animals. Pollutants such as fertilisers, pesticides, detergents, other chemicals and even sediment are having an impact on the water environment within Arun and Western Streams. Some of these chemicals are directly poisonous to the wildlife while others can have an indirect effect. For example, chemicals found in fertilisers and detergents, particularly phosphates and nitrates, cause excessive algal growth. This can suffocate water courses, reducing oxygen levels and killing plant and animal species. In the Arun and Western Streams catchment the main sources of water pollution are from:

Sewage Treatment Works: Sewage treatment works take all of the waste water from homes and businesses in the area. The subsequent discharge can contain chemicals such as phosphate, which in high levels causes pollution. Southern Water have completed improvements to large-scale sewage treatment works at eight sites. These will significantly reduce the concentration of pollutants in some of our rivers, but will not there is still more to do.

Southern Water and the Environment Agency continue to work hard to amend permits and upgrade treatment works. This can be very expensive, so we are also working together to identify novel solutions, such as catchment management or reed bed treatments, to reduce pollution in our water environment.

Rural Diffuse: This is widespread pollution from land use activities such as farming, forestry and recreation. Run-off water from rural land transports pollutants such as fertilisers and pesticides into water courses. As much of the land within Arun and Western Streams is rural, this is a big challenge. However, this type of pollution is generally unintentional and good land management practises can help address the problem.

The River Rother is also very susceptible to sedimentation, as erosion of agricultural land deposits fine sediments into the river. This smothers habitat, killing insects and destroying fish spawning grounds. The SMART project is investigating the locations most prone to erosion and actions required to tackle the problem.

Urban Diffuse: This is widespread pollution from run-off in built up areas. Rain water run-off can pick up a range of pollutants such as oil, heavy metals and nutrients and enter the water environment directly or through drain systems. This type of pollution is often toxic killing fish and insects that live in the rivers. Rain Gardens are being trialed by the ARC project within the catchment. These involve planting on impermeable surfaces such as roofs and car parks to absorb more rain water run-off and reduce flood risk, while also helping to reduce urban diffuse pollution.

If you notice pollution in any part of the Arun and Western Streams Catchment, please call the Environment Agency incident hotline on 0800 80 70 60 at any time.